After all these years we decided to add a section on our website often spoke of but, not published. In our humble opinion what makes a car or truck at a Car Show is Unique, One-of-a-Kind, Seldom Seen Options. For example: of the 1,522,536 Chevrolet’s sold in 1957 there are probably 700,000  still left in existence ! So, what separates the chafe from the wheat is not only the Color Combination and, the Quality of the restoration but, ‘uniqueness’ of the individual vehicle.  General Motors, for instance,  offered an array of unusual options over the years that you almost never see, either because the owner of the car removed them, or they were stuffed away and ignored.

Some of the truly unusual options were:

6.”Vanity Case”– offered in 1957-1958 Cadillac Brougham’s in both the front and back seat. Almost never still in place. They contained an ounce of Arpe’ge Extrait de Lanvin ….touted as “a perfume in the Brougham price class”. They were accompanied by a brush, comb and mirror.

10.“Port-a-Wall White Walls”. Since the cost of upgrading Blackwall tires to Whitewalls was greedily explored by the dealers and tire stores, the ‘Port-a-Wall’ Whitewalls became instantly popular as ‘a cheap fix’. J.C. Whitney was famous for offering them (no more). You simply deflated your tire to allow the edge to be pinched in-between the wheel and tire and ‘Voila’…… instant white wall. Today they are a collector’s item.

There are probably more ‘prizes’ out there . You’re welcome to write me at classicdc@aol.com with more. We will happily add them to our list !

Many of the rarest items on this list can now be found in our Gift Shoppe for sale…..some of these are for display only- NFS= Not For Sale

SOME OF THE CAR VASES YOU CAN FIND FOR SALE ON OUR SITE. THEY WERE A POPULAR ITEM USED DURING THE 30′, 40’S, AND EVEN LATER IN THE BIG SEDAN’S LIKE THE PACKARD, LINCOLN, CADILLAC, DUESENBERG …. EVEN FUNERAL COACHES.

THIS IS THE SUPER RARE ‘SWAMP COOLER’ , BETTER YET, IN STAINLESS STEEL WITH ORIGINAL DECAL – NFS

SPACE SAVER SPARE TIRE N.O.S. FOR USE ON CAMARO’S AND FIREBIRDS

THIS IS AN ACCESSORY ‘VANITY MIRROR’ OPTIONED ON MOST ALL CARS. THIS ONE HAS THE SERVICE RECORD LOG PRINTED ON IT – NFS 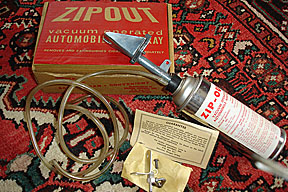